The December issue of Science published a list of the ten most outstanding scientific breakthroughs of the past year. The Top Ten includes the results of paleogenetic studies of a bone fragment found in 2012 in Denisova Cave in the Altai Mountains. It turns out that the tiny fossil-bone fragment belongs to a first-generation offspring of two different representatives of the genus Homo—Denisovans and Neanderthals. This discovery was first announced at the International Symposium “The Origins of the Upper Paleolithic in Eurasia and the Evolution of the Genus Homo,” held in July 2018 at the Denisova Cave Research Center of the Institute of Archeology and Ethnography SB RAS (Novosibirsk), just a step away from Denisova Cave, the discovery site of the unique find.

The many years of cooperation with Novosibirsk archaeologists allowed representatives of SCIENCE First Hand not only to attend the symposium but also witness a change in the scientific paradigm of human evolutionary biology, brought about in large part by the study of Altai finds

Although today many people still believe in the divine act of man’s creation, over the last hundred years science has collected vast compelling evidence of the long and gradual evolution of our very distant ancestors, who branched about 6–7 million years ago from the common evolutionary trunk they shared with apes. However, human genesis turned out to be not near as simple and straightforward as the first researchers believed it to be. 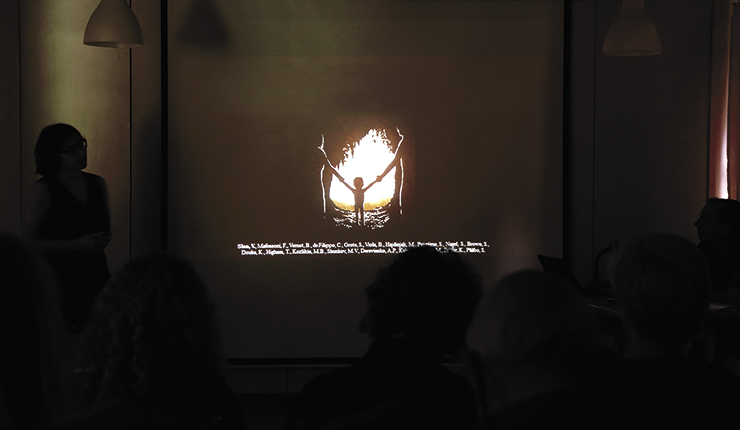 The most compelling arguments in favor of the multiregional concept of human origin relied on the extensive multiyear studies in the Russian Altai, which were launched by an outstanding Soviet archaeologist and historian Academician Alexei P. Okladnikov. An interdisciplinary research into the Altaian Paleolithic has shown that the evolution of cultural traditions lasted there for at least 300,000 years (including the establishment of the Upper Paleolithic 50,000—40,000 years ago) without any noticeable signs of outside influences. And yet, what were they like, those people who made artifacts and decorations typical of the early Upper Paleolithic before Europeans did it?
Regrettably, the Altaian Paleolithic was stingy with anthropological evidence, which, in addition, consisted of the rare findings of teeth and bone fragments not allowing restoration of the appearance of their owners. In 2005, Academician Derevyanko wrote, “Our most optimistic expectations are to find in Altai a skeleton of the Paleolithic man. We have a couple of Paleolithic findings currently studied at the Max Planck Institute for Evolutionary Anthropology in Leipzig: some teeth and a bone fragment. But a complete skeleton is an archaeologist’s fondest, albeit specific, dream.” No complete skeleton of a fossil man has been discovered in Altai so far, and yet the reality has exceeded our grandest expectations (Shunkov and Derevyanko, 2018)


This picture became much clearer through the development of paleogenetics, a science that emerged in the 1980s at the junction of molecular biology, classical archeology and paleontology. Now scientists have learned to isolate and identify DNA sequences from archeological and paleontological remains and can study, from this perspective, populations of organisms that had vanished from the Earth, including human ancestors. 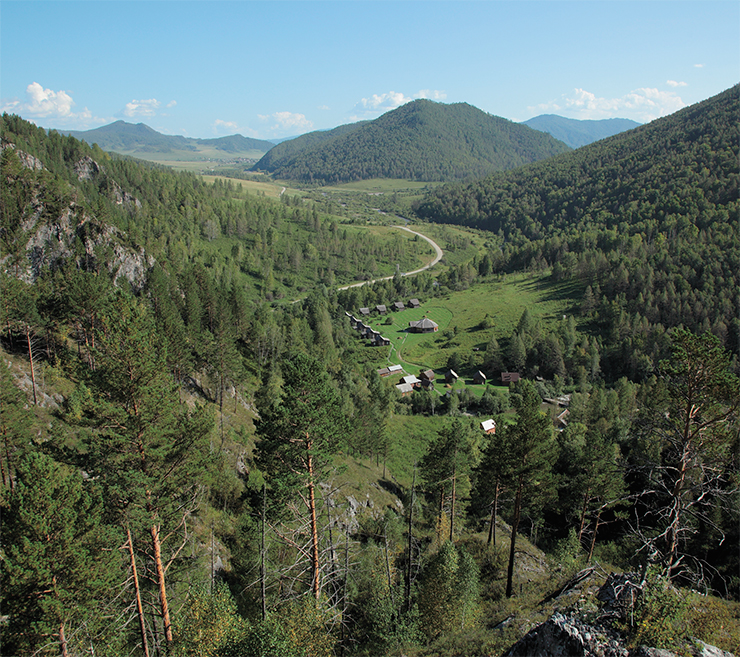 Until recently, one of the most likely candidates for the role of our ancestors has been the Neanderthal man, whose brain volume would match that of modern humans and who felt comfortable at temperate latitudes. However, based on the results of the first paleogenetic studies of the mitochondrial DNA from fossil bone remains, scientists inferred that the Neanderthals had been a dead-end branch of mankind. New results rehabilitated them only at the beginning of the new millennium, with the emergence of advanced DNA sequencing technology, able to “read” nuclear DNA and prove that the genome of an average human with non-African roots has 1–2 % of Neanderthal genes.

The Max Planck Institute for Evolutionary Anthropology (Germany) analyzed bone anthropological remains of the Neanderthals, including specimens from the Altai caves—Denisova and Okladnikova. These specimens showed exceptional preservation due to a special temperature regime in the caves. Among them was a small bone from Denisova Cave—a phalanx of a child’s little finger, which created a real sensation. 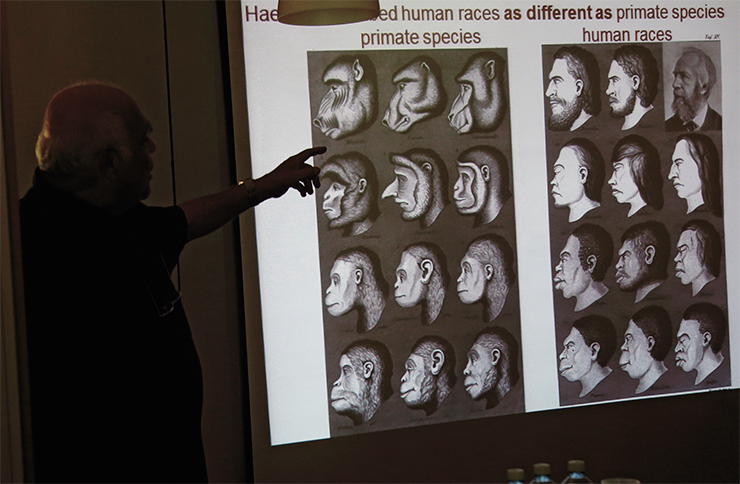 Professor Svante Pääbo, Director of the Department of Genetics at the Max Planck Institute, recalls that in the spring of 2009, they received another bone fragment from Anatoly Derevyanko, found the previous year in Denisova Cave. The bone was tiny, and Pääbo thought it unimportant and only decided to run some mtDNA tests, when time permits. But then came the unexpected: “On December 3, 2009, I was attending a meeting on the rat genome… As I walked from the dining hall to the lecture hall after breakfast, my cell phone rang. It was Johannes Krause calling from Leipzig and he sounded strangely excited. I asked him what the matter was. He asked me if I was sitting down. When I said no, he said I’d better sit down before hearing what he had to tell me…” The stunning news was the discovery of a new human species, unknown to science, which literally turned upside down the established ideas about the origin and evolution of Homo sapiens.

Paleogenetic analysis of the fossil bone remains of the Denisovan man showed that these hominins, like the Neanderthals, left a mark in the genome of many modern human populations. Judging by the genetic diversity, it was the Denisovans who dominated in North Asia in the Stone Age. 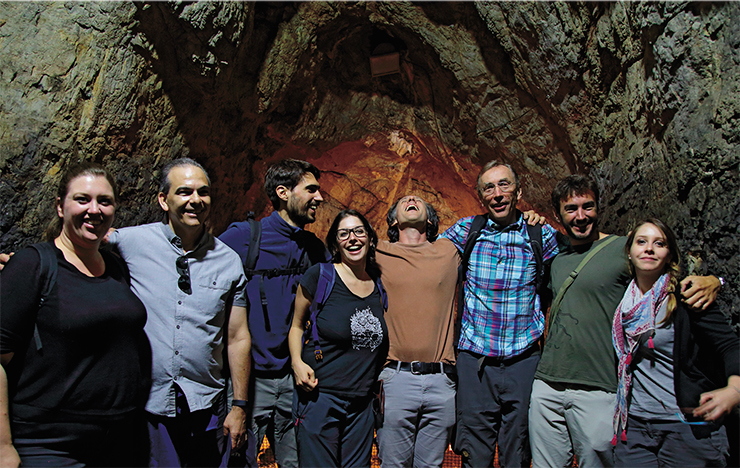 The fact that archaeologists find bone remains of the Denisovans and Neanderthals in the same cultural layers of Denisova Cave suggests that these hominins lived this area at the same time. But how did they get along with each other? We cannot answer this question decisively, but the last unique find speaks volumes.

Denisova 11 is a small bone whose exact position in the skeleton remains unknown. By comparing it with the known long bones of Neanderthals and modern humans, scientists found that it belonged to a female not younger than 13 years of age. After sequencing the nuclear DNA extracted from the specimen, scientists associated the bone with a young crossbreed girl, whose nuclear DNA contains about 42 % Denisovan genes and 39 % Neanderthal ones. In other words, her ancestors came from the two ancient groups, in equal proportions. Judging by the degree of heterozygosity (nucleotide differences) of the genome, it contained two different sets of parental chromosomes: one from a Denisovan and the other from a Neanderthal. Considering the mitochondrial DNA, which is always inherited through maternal lineage, it can be argued that she was an offspring of a Denisovan father and a Neanderthal mother. 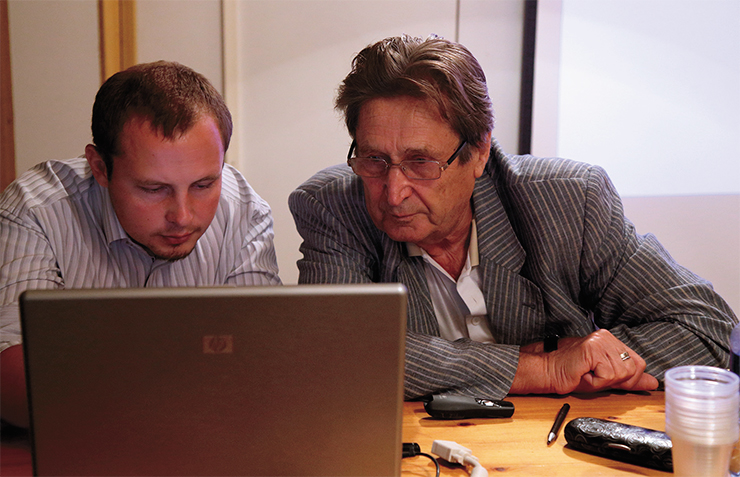 Academician Derevyanko believes that “the recent discovery in Denisova Cave holds utmost significance as it once again proves the existence of a constant exchange of genes between the ancient human populations that had formed in different territories. However, this exchange could have occurred only between different subspecies since crossbreeding between different species does not produce fertile offspring. Thus, this discovery confirms the hypothesis that several different subspecies of Homo sapiens took part in the evolution of modern mankind”

Moreover, studies have shown that the Denisovan father himself had had many generations ago at least one Neanderthal ancestor, and the Neanderthal mother turns out to be genetically closer to the Neanderthals from the Croatian cave of Vindija rather than to her Altaic neighbors, i.e., could have belonged to relatively recent migrants from Eastern Europe. Perhaps, this find suggests that these ancient people might have migrated between Eastern and Western Eurasia. 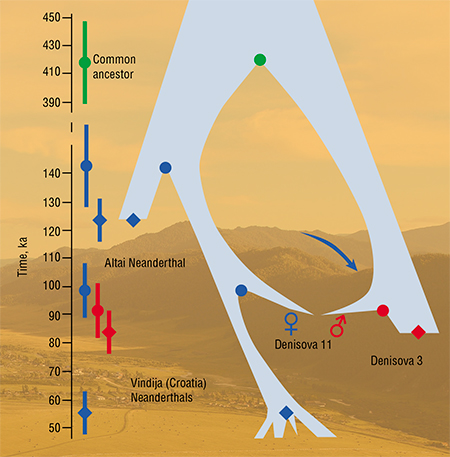 Discovering direct evidence of successful crossbreeding between different representatives of ancient people, whose evolutionary paths diverged more than 390,000 years ago, is itself a unique event. Finding a first-generation hybrid among the few ancient specimens means that different groups of late Pleistocene hominins could have crossbred on a regular basis.

Through paleogenetic research, today we know that the Neanderthals also crossbred with the ancestors of modern non-Africans and, probably, with the earlier ancestors of modern people, and the Denisovans mixed with the ancestors of the present population of Oceania and Asia. In the light of all these data, our family tree no longer looks like a tree—it has turned into a bush with interwoven branches. Moreover, paleogeneticists hope to test another bold assumption, claiming that the Denisovan genome could contain a spree of genes that merged into it from a yet unknown hominin that had separated from the ancestors of people of the modern physical type more than a million years ago and could have lived till the end of their days in secluded corners of Eurasia.