Ancient DNA Has Revealed Its Secret

According to the experts of the “Science” magazine, a successful application of molecular genetic methods in archaeology and paleontology is the third in the list of research advances of the first decade of our century. The new methods for DNA decoding have provided information about the genome structure of extinct organisms that lived tens of thousands years ago, which has given rise to unprecedented progress in these traditional fields of knowledge

Paleogenetics, a modern research field at the interface of archaeology and molecular genetics, has been actively developing owing to an ever wider application of high-throughput DNA sequencing (decoding) methods.

Until recently,w several unsolved problems interfered with the development of this field, the main of which being possible contamination of the ancient genetic material with contemporary DNA. The state-of-the-art DNA sequencing technologies make it possible to efficiently resolve the problem, since they give information about the degree of ancient DNA degradation, which is the most reliable criterion for its authenticity. Thus, a system for assessing the data reliability has been elaborated, which takes into account several characteristics of DNA antiquity such as prevalence of relatively short fragments, chemical degradation of nucleotides, and the distribution pattern of chemically modified DNA bases over the sequenced fragments, in particular their clustering at the ends of molecules (Krause et al.).

The technological procedures of high-throughput sequencing are considerably less sensitive to being contaminated with contemporary genetic material as compared with high-sensitive variants of PCR used in traditional paleogenetics studies. Therefore, the corresponding results can persuade the most desperate skeptics. This opens up new prospects for studying the DNA of ancient microorganisms and archaic humans.

Any paleogenetic study is destructive by its very nature since isolation of a DNA sample requires destruction of a certain quantity of a paleospecimen (for example, bone tissue). Since these specimens are valuable sources of ancient DNA in themselves, a researcher always has to solve the problem of obtaining maximum information (in this case, a maximally possible amount of informative genetic markers) by minimally destroying the initial specimen. Earlier, DNA extraction from several hundred milligrams of bone powder provided information about the structure of only a small mitochondrial DNA fragment or of a limited set of short nuclear DNA loci. Now modern methods make it possible to obtain an incomparably larger volume of information by analyzing several dozens milligrams of the initial paleospecimen up to a complete genomic sequence of the organism whose remains are examined. 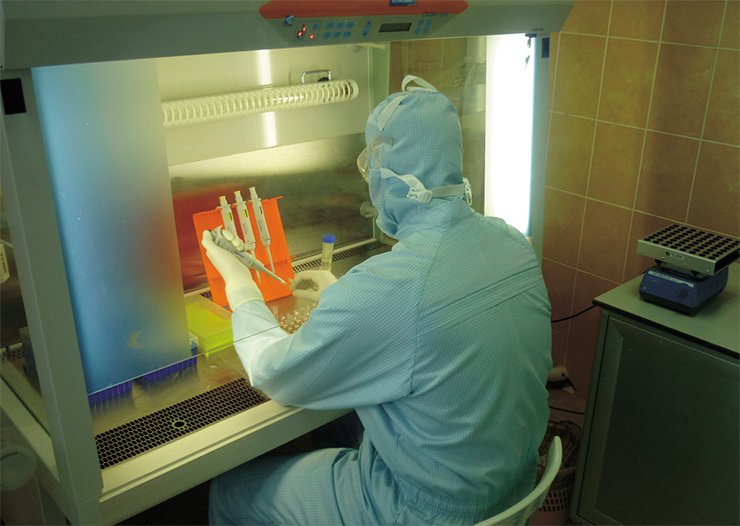 The possibility of a genome-wide analysis of an ancient organism levels, to a certain degree, the informational capacities of molecular genetic assays of ancient and modern DNA samples, which currently is limited only by state-of-the-art molecular genetics, that is by the level of our knowledge about the genome structure and function of a studied organism.

Certainly, in real life researchers may still encounter poor DNA preservation in fossils, excess external contamination, and other problems. Besides, the high cost of operating the equipment, which limits the conducting of serial assays, will be an important hindrance for the majority of Russian research teams in their attempts to use new methods.

Nonetheless, the potential informational capacity of paleogenetic studies using high-throughput DNA sequencing is increasing manifold. So, we can responsibly speak about the birth of a new field in paleogenetics – paleogenomics, which studies the genomic structures of extinct organisms. In this respect, the most promising expectations are associated with examining the Pleistocene organisms, ranging from extinct animal and plant species to the representatives of the genus Homo.

An illustrative example of the advances in this field is the discovery of a new Altai hominid species, that coexisted with man of a modern physical type, as well as assessment of the contributions of the Neanderthal and Denisova man to the gene pool of the present humankind. These discoveries provide a new view of one of the most intriguing evolutionary phenomena, the origin of man. We have a long way to go yet. For example, the long-range collaboration program of the Institute of Cytology and Genetics and the Institute of Archaeology and Ethnography in Novosibirsk, which is to be implemented in the nearest future, is going to estimate the contribution of these hominid species to the gene pools of ancient and contemporary people.

High-throughput DNA sequencing methods will also encourage the studies of later periods in human history, from the Neolith to the Middle Ages. Several topical research directions, such as reconstruction of race- and ethnogenetic processes, animal and plant domestication, as well as the emergence and spreading of human pathologies will also get a stimulus for their development.

Combining the advantages of paleogenetics (a direct study of the genomes of ancient organisms) and modern molecular genetics, which uses massive analysis of a large number of informative genetic markers, will raise archaeology to a new level regarding the reconstruction of the human past as well as the ancient human environment.